On Keeping the Heart (eBook)
On Trusting Christ
Device Against the Learned and Wise
What does it mean to be “Reformed”?
What Are the Usual Sins which are Incident to Sharp and Tedious Afflictions?
A Discourse on Christ our Passover
Heaven on Earth: A Serious Discourse Concerning a Well-Grounded Assurance (eBook)
What Went Wrong with the YRR/New Calvinism Movement?
8 Ways to Redeem the Time in This Season of Isolation
Systematic Theology

The Bible and the Closet: How We May Read the Scriptures with the Most Spiritual Profit (eBook) 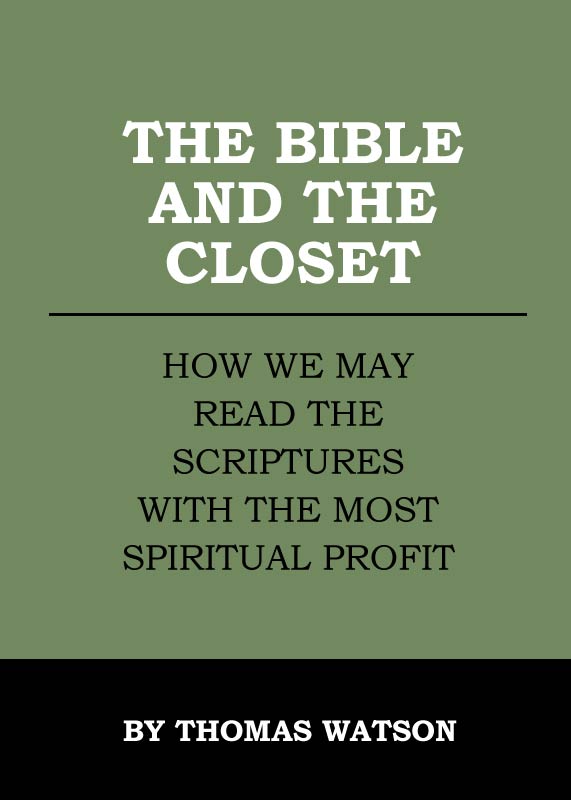 in ePub, .mobi and .pdf formats.

A special thanks to William H. Gross for the updated language/syntax and explanatory notes (in blue).

It is a proper ground for regret, that a people who owe their origin, social habits, religious privileges and national character, to the Puritans and Non-conformists of England, should manifest so little interest and curiosity, in regard to the names, persons, manners, sufferings, and writings, of their ancestry, as appears to be the case at present in the United States. The members of the churches properly attached to the doctrines of the Non-conformists, do not have that lively impression of gratitude and obligation to the struggles of the Puritans, which should characterize men who enjoy inestimable blessings, purchased by cruel bonds, far exilements, and bloody death. The young are almost ignorant of the church history of the sixteenth and seventeenth centuries; and when they do hear of the Puritans, it is probably from some infidel novelist or historian, who describes them as uncouth, sour, ignorant fanatics, or from the bigoted representations of half-popish ecclesiastics, who seem to regard amputation from Rome as a severe affliction.

The ordinations of the ministers in Congregational, Baptist, and Presbyterian churches usually take place without any reference to the distinctive principles for which our fathers contended, and which are now challenged and ridiculed by men who call Hampden1 and Pym2 traitors, Archbishop Laud3 a saint, and Charles I.4 a blessed martyr. The consequence is, that our young people suppose these things are unimportant; and while they hear them assailed by fashionable and popular preachers, and no refutation is offered, they naturally fear that we have a poor cause. It has become a common thing with a certain clique of the press and pulpit, to deny piety, sound theology and literature to the Non-conformists.5 It is high time that the incomparable works of these men be made known to our churches, and they will appear an ample testimonial to their worth. It is probable that history cannot afford in any age or country a body of clergymen equal in virtue, talent, and aptness to teach, with that ejected from the Church of England by the act of uniformity passed by Charles, in 1662. The world was called to witness the reality of religious principle, when more than two thousand ministers, described by John Locke as “worthy, learned, pious, orthodox divines,” sacrificed their all, rather than injure their consciences and desert the cause of civil and religious liberty. The celebrated Harvey observes: “I esteem the Puritans as some of the most zealous Christians that ever appeared in our land, to settle faith on its proper basis — the meritorious righteousness of Christ; to deduce obedience from its true origin — the love of God shed abroad in the heart; to search the conscience and convince the judgment; to awaken the lethargic and comfort the afflicted soul, with a thorough knowledge joined to a masterly application of the divine word. These are real excellences: these entered into the preaching; these, if we examine impartially, are to be found in the writings of the Puritans.” Whitfield bears the same testimony: “The Puritans of the last century, burning and shining lights, wrote and preached after they were cast out of the church, as men having authority; a peculiar unction attends their writings to this day; and for these thirty years past I have remarked that the more the true and vital religion has revived at home and abroad, the more the good old puritanical writings have been called for.”

Brown of Haddington, in his general history, has the following remarks: “Never perhaps, since the apostolic age, was the Christian system better understood than by the British divines under Cromwell.” “The Puritans,” says Robert Hall, “are unquestionably the safest of all uninspired guides. The masculine sense, the profound learning, the rich and unequalled unction of the fathers of the modern church, exert a powerful influence on the mind, and greatly contribute to form and mature the characters of men.”

Mr. Erskine very finely observes: “This class of men, in respect of character and services, are universally venerated. By their sufferings and labors they rescued the key of knowledge from the unworthy hands in which it had long lain rusted, and been misused, and generously left it as a rich inheritance to all coming generations. They speak with the solemn dignity of martyrs; deep and solemn seriousness is the common character of them all. They seem to have felt much; religion was not allowed to remain an unused theory in their heads; they were forced to live upon it as their food; to live upon it as their only strength and comfort; hence their thoughts are never given as abstract views. These venerable worthies do not merely give us ideas, but ideas colored by deep affections. This gives us a great interest in their writings. They are real men, and not books we are conversing with. These were the great men of England; they were indeed a noble army.”

It is proposed to publish, in uniform style, and in close succession, a selection of the writings of the Puritans and Non-conformists, who were ejected from the Church of England in 1662. Let it appear if they were not of a kindred spirit to those martyrs recorded in the eleventh chapter of Hebrews, and of whom the Spirit of God testifies that they were men “of whom the world was not worthy.” Every volume will be complete in itself and it is designed to render the publication not only profitable to the private Christian as a guide to his devotions, but useful to the clergy, by introducing them to works which, from their exceeding scarceness, can hardly be procured in England. As far as practicable, there will be biographical notices of the authors affixed to each reprint; for to allow the memory of such men to die, is injurious to posterity. The reader is earnestly entreated to consult the texts which are so freely quoted; he will find it a delightful task, and with God’s blessing upon it he will become “mighty in the Scriptures.” 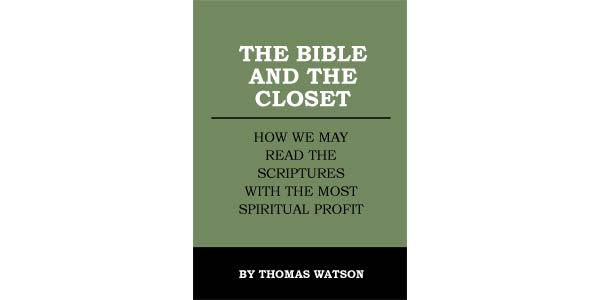