Behold the Infinite Love of Christ! 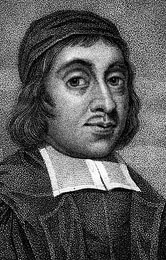 "And being found in fashion as a man, He humbled Himself, and became obedient unto death, even the death of the cross." Philippians 2:8 See here the astonishing humility of Christ. That Christ should clothe Himself with our flesh--a piece of that earth which we tread upon--oh infinite humility! For Christ to be made flesh, was more humility than for the angels to be made worms! He stripped Himself of the robes of His glory, and covered Himself with the rags of our humanity!

Christ's humiliation consisted in His being born, and that in a poor condition; and His undergoing . . . the miseries of this life, the cursed death of the cross, and the wrath of God.

The prime cause of Christ's humiliationwas free grace! Love was the intrinsic motive. Christ came to us, out of pity and love. Not our deserts--but our misery, caused Christ to humble Himself. This was a plot of free grace--a design of pure love! Christ incarnate, is nothing but 'love' covered with flesh! As Christ's assuming our human nature was a masterpiece of wisdom, so it also was a monument of free grace!

Consider where Jesus came from. He came from heaven, and from the richest place in heaven--His Father's bosom, that hive of sweetness.

Consider for whom Jesus came. Was it to His friends? No! He came for sinful man--who had defaced His image, and abused His love, and rebelled against Him! Yet He came to man, resolving to conquer our obstinacy with His kindness.

Among the several wonders of the magnet is that it will not draw gold or pearl--but despising these, it draws the iron to itself--one of the most inferior metals. Just so, Christ leaves angels, those noble spirits, the gold and the pearl--and comes to poor sinful man, and draws him into His embraces!

Consider in what manner Jesus came. He came not in the majesty of a king, attended with His royal retinue --but He came poor.

Consider the place Jesus was born in-- a feeding trough was His cradle, the cobwebs were His curtains, the beasts were His companions!

Christ was so poor, that when He needed money, He had to work a miracle to obtain it. When He died, He made no will.

Consider why Jesus came. That He might take our sins upon Him--and so appease God's wrath for us, and bring us into His kingdom! He was poor--that we might become rich!

He was born of a virgin--that we might be born of God!

He took our flesh--that we might have His Spirit!

He lay in the feeding trough--that we might lie in paradise!

He came down from heaven--that we might go up to heaven!

And what was all this, but love? If our hearts are not rocks, this love of Christ should affect us. "May you experience the love of Christ, though it is so great you will never fully understand it!" Ephesians 3:19

From A Body of Divinity by Thomas Watson

Doctrine
Chad Van Dixhoorn
The Bible’s Conflict-Free Creation Story
Matthew Miller
Salvation and Receiving Mercy
Kevin Gardner
7 Reasons God's Sovereignty Gives those in Christ Contentment in the Face of Adversity
Monergism Answers
The illusion of digital community
Samuel James
Good Leaders Are Easy to Follow: How Shepherds Shape the Sheep
Steven Lee
Will God Provide for Your Needs?
Mr Garrett Kell
Lazy Christian is an Oxymoron
Costi Hinn
Lawful Love: How the Law Preserves and Propels Our Love
David Schrock
The Hostility of Loving Your Neighbor
Curated Resources
For The Kids Nobody Wants: Imagine There’s No Children
David Schrock
He Tailors Your Trials: How God Fits Your Afflictions Just For You
Curated Resources
Techno-Slavery: Being Ruled by Devices
Curated Resources
No Such Thing as “Little Sins.”
Kendall Lankford
10 Reasons to Host a Pastor Story Hour
Kendall Lankford
John Witherspoon and Slavery
Kevin DeYoung
Four Tips for Communicating the Gospel to Roman Catholics
Leonardo De Chirico
Where's Sola Scriptura In Scripture? - Luke 1:5-25
John Samson
Is Genesis Just One of the Many Creation Myths?
John Stonestreet
The Way to True Peace and Rest (eBook)
Robert Bruce
The Meaning Of Sola Scriptura - 2 Timothy 3:16-17 (MP3)
John Samson
How the Golden Chain Gives Us Missiological Confidence
Curated Resources
Put Not Your Trust in Princes -- An Exposition of Psalm 146
Kim Riddlebarger
Promises: God Hears Your Prayers
Zack Groff
The Regulative Principle and the Corporate Recitation of Creeds
Samuel G. Parkison
Seven Occasions for Fasting
Zack Groff
FBC Jax Speaks the Truth in Love about Sexuality
Denny Burk
Why We Reread the Bible
Ryan Higginbottom
Against Autonomy
T. M. Suffield
10 Practices to Kill Pride
Gavin Ortlund
Who Killed the Prayer Meeting?
Paul Miller
An Antidote to Spiritual Amnesia
Rev David P Murray
You’re a Pastor, Not a Therapist
Jeremy Pierre
What Christians Can Learn from Secular Humanism
John Stonestreet
A Nation of Biblical Illiterates
Thaddeus Williams
Calvin on the Authority of Scripture
Curated Resources
How Patient Is God With Us?
Nicholas T Batzig
The Classical Doctrine of God
James Dolezal, Dr Sinclair B Ferguson
What does the Bethel movement teach?
Costi Hinn
With Reverence and Awe (and Kids)
Curated Resources
We Live in Babylon, Not Israel
Marvin Olasky
What does it mean to present our bodies as a living sacrifice to God (Rom. 12:1)?
Dr Harry L Reeder III
What to do Before you Read the Bible
Curated Resources
The New Testament Explosion
Mitch Chase
The Megachurch Century
Shane Rosenthal
Keeping the Faith: Spurgeon and the Downgrade Controversy
Jason Allen
Jesus is God: Four Ways to See Jesus’s Divinity in John’s Gospel
David Schrock
Encore: Evangelicalism in 2020 and Beyond
Mark DeVine
The Heart of Faith (YouTube)
A Craig Troxel
When Were Christians First Regarded as Intolerant “Haters”?
Michael J Kruger