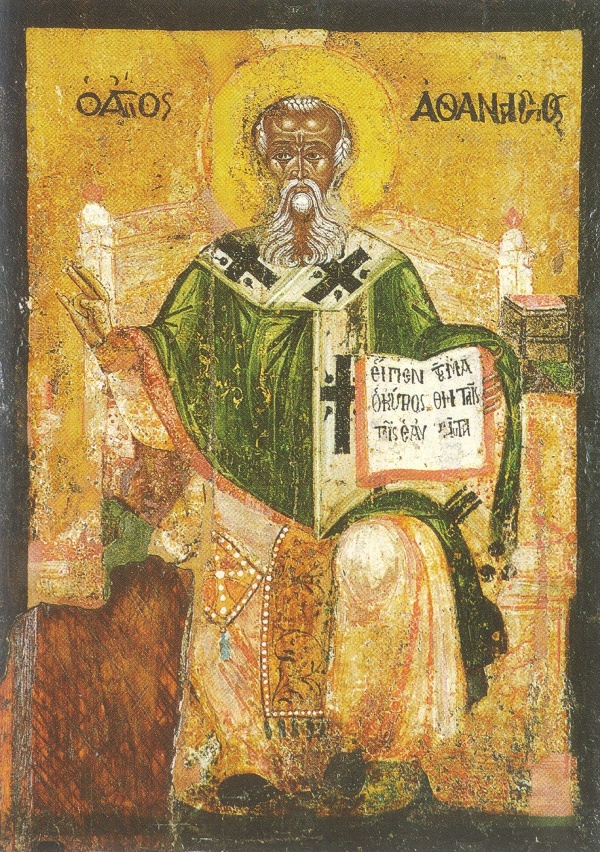 The Athanasian Creed is one of the three ecumenical creeds widely used in Western Christendom as a profession of the orthodox faith. It is also referred to as the Symbolum Quicunque because the first words of the Latin text read, Quicunque vult salvus esse...("Whoever wishes to be saved...").

According to tradition Athanasius, bishop of Alexandria in the fourth century, was the author of the creed. The oldest known instance of the use of this name is in the first canon of the Synod of Autun, ca. 670, where it is called the "faith" of St. Athanasius. Although doubts concerning the Athanasian authorship had been expressed in the sixteenth century, Gerhard Voss, a Dutch humanist, demonstrated the impossibility of reconciling the facts known about the creed with the age of Athanasius. He published his findings in 1642. Subsequent scholarship, both Catholic and Protestant, has confirmed the verdict of Voss. Among other factors the Athanasian Creed is clearly a Latin symbol, whereas Athanasius himself wrote in Greek. Moreover, it omits all the theological terms dear to Athanasius such as homoousion, but it includes the filioque popular in the West.

There have been many suggestions as to the identity of the actual author. One of the more widely held theories is that the date of the creed was ca. 500, the place of composition a south Gaul location influenced by theologians of Lerins, and the special theological issues both Arianism and Nestorianism. These conclusions disqualify Ambrose of Milan even though several eminent scholars point to him as author. Caesarius of Arles perhaps comes closest to the above specifications. However, the question of authorship and origin remains open. The earliest copy of the text of the creed occurs in a sermon of Caesarius early in the sixth century. Other manuscripts containing the creed have been dated in the latter part of the seventh and eighth centuries. In these earliest mentions it appears that its functions were both liturgical and catechetical.

The creed was counted as one of the three classic creeds of Christianity by the time of the Reformation. Both Lutheran and Reformed confessional statements recognize the authoritative character of the Quicunque (with the exception of the Westminster Confession, which accords it no formal recognition). However, the contemporary liturgical use of the creed is largely confined to the Roman and Anglican communions.

Structurally the creed is composed of forty carefully modeled clauses or verses, each containing a distinct proposition. These clauses are divided into two clearly demarcated sections. The first centers on the doctrine of God as Trinity. The precise formulation of the doctrine is designed on the one hand to exclude unorthodox viewpoints, and on the other hand to express the insights explicit in the church under the influence of Augustine's teaching. Consequently this part of the creed expresses what the church felt to be the necessary understanding of God, the holy Trinity, calling it the fides catholica. The paradox of the unity and the Trinity of God is affirmed in the face of modalism, which attempted to solve the paradox by insisting on the unity while reducing the Trinity to mere successive appearances, and the Arians, who tried to resolve the difficulty by rejecting a unity of essence by dividing the divine substance.

The second section of the Athanasian Creed expresses the church's faith in the incarnation by affirming the doctrinal conclusions reached in controversies regarding the divinity and the humanity of Jesus. The creed does not hesitate again to affirm a doctrine which in human experience is paradoxical, that in the incarnation there was a union of two distinctly different natures, the divine and the human, each complete in itself, without either losing its identity. Yet the result of this union is a single person. The creed thus repudiates the teachings that Christ had but one nature (Sabellianism), or that the human nature was incomplete (Apollinarianism), or that the divine nature was inferior to that of the Father (Arianism), or that in the union of the two natures the identity of one was lost so that the result was simply one nature (Eutychianism).

It has been said that no other official statement of the early church sets forth, so incisively and with such clarity, the profound theology that is implicit in the basic scriptural affirmation that "God was in Christ reconciling the world to himself." The somewhat technical case of its phraseology notwithstanding, the concern of the Athanasian Creed is to assert a conception of the Triune God which is free from anthropomorphic polytheism and a conception of the incarnation which holds in tension the vital data concerning Christ's humanity and divinity. It is this doctrinal perspective which lends significance to the clauses at the beginning and end of the two parts of the creed ("whoever wishes to be saved must think thus" about the Trinity and the incarnation). They do not mean that a believer must understand all theological details to be saved or that he must memorize the language of the creed. What is intended is the fact that the Christian faith is distinctly Christocentric, trusting in Christ as Savior. The church knows no other way of salvation and therefore must reject all teachings which deny his true deity or his real incarnation.

The creed does not specify the authority, either the Bible or church, upon which it makes its affirmations. However, it is a scriptural creed because it uses the ideas and sometimes the words of Scripture. It is a church creed because it is a consensus within the Christian fellowship. The Athanasian Creed remains a superb compendium of Trinitarian and Christological theology and offers itself as a ready outline for catechetical purposes in keeping with its original intent.