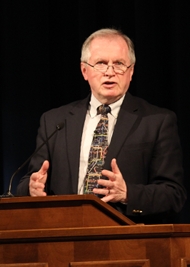 This post is adapted from a chapter from The Love of God,
edited by Christopher W. Morgan.

Some Different Ways the Bible
Speaks of the Love of God

I had better warn you that not all of the passages to which I refer actually use the word love. When I speak of the doctrine of the love of God, I include themes and texts that depict God’s love without ever using the word, just as Jesus tells parables that depict grace without using that word.

With that warning to the fore, I draw your attention to five distinguishable ways the Bible speaks of the love of God. This is not an exhaustive list, but it is heuristically useful.

1. The Peculiar Love of the Father for the Son and of the Son for the Father

John’s Gospel is especially rich in this theme. Twice we are told that the Father loves the Son, once with the verb jagapaw (John 3:35), and once with oilew (5:20). Yet the evangelist also insists that the world must learn that Jesus loves the Father (14:31). This intra-Trinitarian love of God not only marks off Christian monotheism from all other monotheisms but is bound up in surprising ways with revelation and redemption.

2. God’s Providential Love over All That He Has Made

By and large the Bible veers away from using the word love in this connection, but the theme is not hard to find. God creates everything, and before there is a whiff of sin, he pronounces all that he has made to be “good” (Genesis 1). This is the product of a loving Creator. The Lord Jesus depicts a world in which God clothes the grass of the fields with the glory of wildflowers seen by no human being, perhaps, but seen by God. The lion roars and hauls down its prey, but it is God who feeds the animal. The birds of the air find food, but that is the result of God’s loving providence, and not a sparrow falls from the sky apart from the sanction of the Almighty (Matthew 6). If this were not a benevolent providence, a loving providence, then the moral lesson that Jesus drives home, viz., that this God can be trusted to provide for his own people, would be incoherent.

God so loved the world that he gave his Son (John 3:16). I know that some try to take k´osmoy (“world”) here to refer to the elect. But that really will not do. All the evidence of the usage of the word in John’s Gospel is against the suggestion. True, "world" in John does not so much refer to bigness as to badness. In John’s vocabulary, "world" is primarily the moral order in willful and culpable rebellion against God. In John 3:16, God’s love in sending the Lord Jesus is to be admired not because it is extended to so big a thing as the world, but to so bad a thing; not to so many people, as to such wicked people. Nevertheless, elsewhere John can speak of “the whole world” (1 John 2:2),1 thus bringing bigness and badness together. More importantly, in Johannine theology the disciples themselves once belonged to the world but were drawn out of it (e.g., John 15:19). On this axis, God’s love for the world cannot be collapsed into his love for the elect.

The same lesson is learned from many passages and themes in Scripture. However much God stands in judgment over the world, he also presents himself as the God who invites and commands all human beings to repent. He orders his people to carry the gospel to the farthest corner of the world, proclaiming it to men and women everywhere. To rebels the sovereign Lord calls out, “As surely as I live . . . I take no pleasure in the death of the wicked, but rather that they turn from their ways and live. Turn! Turn from your evil ways! Why will you die, people of Israel?” (Ezek. 33:11).2

The elect may be the entire nation of Israel or the church as a body or individuals. In each case, God sets his affection on his chosen ones in a way in which he does not set his affection on others. The people of Israel are told, “The Lord did not set his affection on you and choose you because you were more numerous than other peoples, for you were the fewest of all peoples. But it was because the Lord loved you and kept the oath he swore to your ancestors that he brought you out with a mighty hand and redeemed you from the land of slavery, from the power of Pharaoh king of Egypt” (Deut. 7:7–8; cf. 4:37). Again: “To the Lord your God belong the heavens, even the highest heavens, the earth and everything in it. Yet the Lord set his affection on your ancestors and loved them, and he chose you, their descendants, above all the nations, as it is today” (10:14–15).

The striking thing about these passages is that when Israel is contrasted with the universe or with other nations, the distinguishing feature has nothing of personal or national merit; it is nothing other than the love of God. In the very nature of the case, then, God’s love is directed toward Israel in these passages in a way in which it is not directed toward other nations.

Obviously, this way of speaking of the love of God is unlike the other three ways of speaking of God’s love that we have looked at so far. This discriminating feature of God’s love surfaces frequently. “I have loved Jacob, but Esau I have hated” (Mal. 1:2–3), God declares. Allow all the room you like for the Semitic nature of this contrast, observing that the absolute form can be a way of articulating absolute preference; yet the fact is that God’s love in such passages is peculiarly directed toward the elect.

5. God’s Love Directed toward His Own People in a Provisional or Conditional Way—Conditioned, That Is, on Obedience

It is part of the relational structure of knowing God; it does not have to do with how we become true followers of the living God but with our relationship with him once we do know him. “Keep yourselves in God’s love,” Jude exhorts his readers (v. 21), leaving the unmistakable impression that someone might not keep himself or herself in the love of God. Clearly this is not God’s providential love; it is pretty difficult to escape that. Nor is this God’s yearning love, reflecting his salvific stance toward our fallen race. Nor is it his eternal, elective love. If words mean anything, one does not, as we shall see, walk away from that love either.

Jude is not the only one who speaks in such terms. The Lord Jesus commands his disciples to remain in his love (John 15:9) and adds, “If you keep my commands, you will remain in my love, just as I have kept my Father’s commands and remain in his love” (v. 10). To draw a feeble analogy: although there is a sense in which my love for my children is immutable, so help me God, regardless of what they do, there is another sense in which they know well enough that they must remain in my love. If for no good reason my teenagers do not get home by the time I have prescribed, the least they will experience is a bawling out, and they may come under some restrictive sanctions. There is no use reminding them that I am doing this because I love them. That is true, but the manifestation of my love for them when I ground them and when I take them out for a meal or attend one of their concerts or take my son fishing or my daughter on an excursion of some sort is rather different in the two cases. Only the latter will feel much more like remaining in my love than falling under my wrath.

Nor is this a phenomenon of the new covenant alone. The Decalogue declares God to be the one who shows his love to a “thousand generations of those who love me and keep my commandments” (Ex. 20:6). Yes, “the Lord is compassionate and gracious, slow to anger, abounding in love” (Ps. 103:8). In this context, his love is set over against his wrath. Unlike some other texts, his people live under his love or under his wrath, in function of their covenantal faithfulness: “He will not always accuse, nor will he harbor his anger forever; he does not treat us as our sins deserve or repay us according to our iniquities. For as high as the heavens are above the earth, so great is his love for those who fear him. . . . As a father has compassion on his children, so the Lord has compassion on those who fear him. . . . But from everlasting to everlasting the Lord’s love is with those who fear him . . . with those who keep his covenant and remember to obey his precepts” (vv. 9–11, 13, 17–18). This is the language of relationship between God and the covenant community.

Notes:
1. Scripture quotations in this chapter are taken from The Holy Bible, New International Version®, NIV®. Copyright © 1973, 1978, 1984, 2011 by Biblica, Inc.™ Used by permission. All rights reserved worldwide.
2. The force of this utterance is not diminished by observing that it is addressed to the house of Israel, for not all in the house of Israel are finally saved; in Ezekiel’s day, many die in judgment.

D. A. Carson (PhD, Cambridge University) is research professor of New Testament at Trinity Evangelical Divinity School, where he has taught since 1978. He is a cofounder of the Gospel Coalition and has written or edited nearly 120 books. He and his wife, Joy, have two children and live in the north suburbs of Chicago.

Christopher W. Morgan (PhD, Mid-America Baptist Theological Seminary) is a professor of theology and the dean of the School of Christian Ministries at California Baptist University. He is the author or editor of sixteen books, including several volumes in the Theology in Community series.

This post is adapted from a chapter from The Love of God, edited by Christopher W. Morgan.